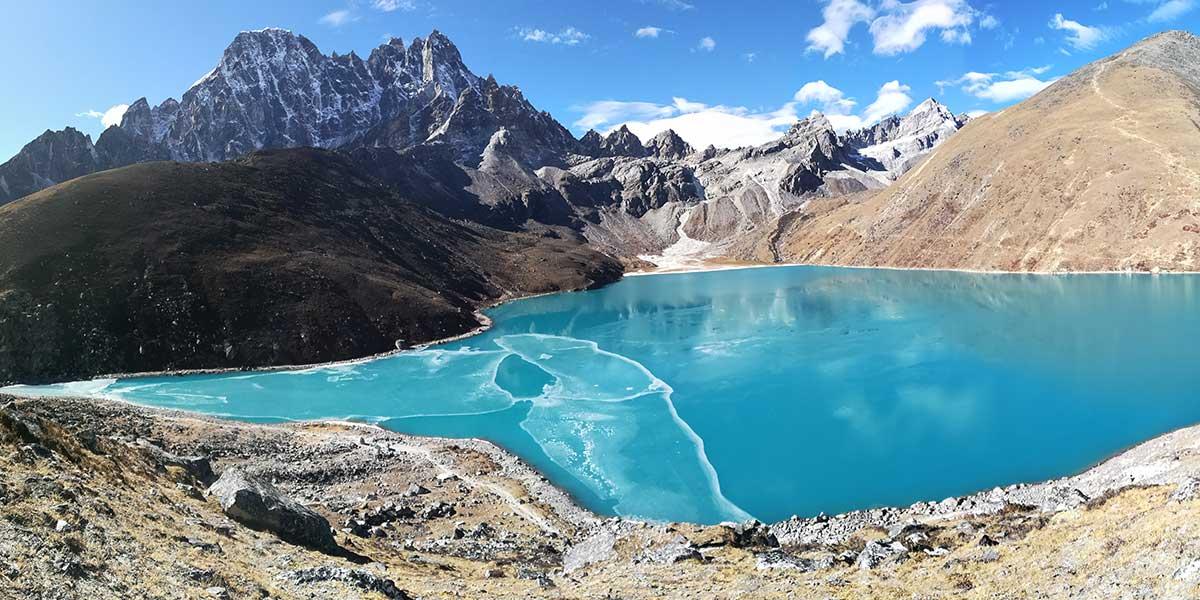 With altitude ranging from 60 meters in the lowlands of Tarai to 8,848.86 meters – the highest point on earth, Mt Everest, Nepal is home to some of the most beautiful and amazing high altitude lakes in the world. The glacial-fed lakes of Nepal not only offers a mesmerizing views and experience, but the trails that leads to those high lakes provide visitors with an opportunity to experience the authenticity of Nepal.

Gokyo Lakes, one of the most amazing high-altitude lake systems of Nepal, is located at the lap of sixth highest mountain of the world — Mt Cho Oyu. Elevated at an altitude of 4,700 to 5,000 meters above sea level, the Gokyo Lakes — the world’s highest freshwater lake system — lies in the Sagarmatha National Park in the Khumbu region. The Gokyo Lakes comprises of numerous lakes. Among the prominent ones are Gokyo Cho, Thonak Cho, Gyazumpa Cho, Tanjung Cho, Ngozumpa Cho, and Longbanga Cho. The major one, however, is Gokyo Cho. These lakes are fed by the Ngozumpa Glacier. The surrounding areas offer a picturesque view of the amazing lakes along with the range of magnificent mountains all around. Even though the world’s highest peak, Mt Everest, is not visible from here, a few hours walk up to Gokyo Ri summit, offers the majestic view of the tallest peak on earth. (Top Photo: Connor Eagan)

Gosaikunda is one of the most popular lakes of Nepal. Lying at an altitude of 4380 meters above sea level in Rasuwa district, the lake holds great religious significance and it is also one of the most popular pilgrimage destinations in Nepal. During Janai Purnima festival, the lake wears a festive look and attracts a large numbers of pilgrims. Gosaikunda lies in the Langtang National Park. Gosaikunda is also the originating point of one of Nepal’s major river system – Narayani or Gandaki.

Phoksundo Lake is the deepest lake of Nepal. It lies in Dolpa district in the mid-western region of Nepal. The freshwater lake lying at an altitude of 3615 meters above the sea level can be reached by trekking in an amazing trail that passes through pristine landscapes, beautiful forest, snowcapped mountains and magnificent views all around. The turquoise blue waters of Phoksundo and its mesmerizing view is aesthetically pleasing. Located in the alpine semi-arid landscape, the lake lies inside the Shey-Phoksundo National Park. The lake has been featured in many movies including the Academy Awards nominated movie Himalaya directed by famed French director Eric Valli.

Tilicho Lake is one of the most spectacular high-altitude lakes of Nepal. Situated at an elevation of 4919 meters above sea level, it is the highest freshwater lake in the world. It lies in Manang district of Nepal in the popular Annapurna Conservation Area. It is a popular destination among foreign trekkers. Though the lake is not part of the famous Annapurna Circuit trek, many trekkers take a short detour to Tilicho Lake before resuming their Annapurna Circuit trek. Some seasoned trekkers reach to Jomsom directly from Tilicho by crossing the Tilicho Pass (5230 meters) from TilichoLake.

Tsho Rolpa is one of the biggest glacial lakes of Nepal. It lies in the Rolwaling region of Dolakha district, north-east of Kathmandu. Located at an altitude of 4,580 meters above sea level, the glacial lake is one of the important wetlands of Nepal. The Rolwaling region, which is situated between Everest in the east and Langtang in the west, lies inside the Gaurishankar Conservation area. Likhu Chuli, which rises high in front of the lake, provides a mesmerizing view of the surrounding. The lake is four-day trek away from Singati – the nearest motorable village, Singati. The trek offers an insight into the local lifestyle of the Tibetan-influenced Sherpa culture.